Electroneum has all the right ingredients to go viral. This article gives several reasons why there’s a great possibility that Electroneum might become the first day-to-day transactional coin and achieve mass adoption.

This might just be what the world needs in order for cryptocurrency to become mainstream.

Photo by Slava Bowman on Unsplash

What is Required for Mass Adoption?

Let’s have a look at traditional currencies like the US Dollar and the Euro and define the properties of a successful, mass-adopted currency. A currency, or any medium of exchange, for that matter, only has value if everyone believes it has value.

It’s a system of trust.

But for that system of trust to function properly, it has to be trusted by a lot of people. What use does any coin have if you want to exchange it for something, but nobody around you want to accept it as payment?

The success of any currency (whether fiat or crypto) is directly related to the size of its user base.

So for Electroneum to become an everyday coin, it has to come into the hands of a lot of people. And all of them needs to believe it has value.

In addition, for convenience’s sake, it also needs to:

To achieve mass adoption, Electroneum will firstly need a massive user base and also possess these 3 features. Without them, it will be just another currency that came and went.

So let’s examine Electroneum in the light of these criteria. Here are the top reasons why I think Electroneum might just be able to attain these features and become mass-adopted. 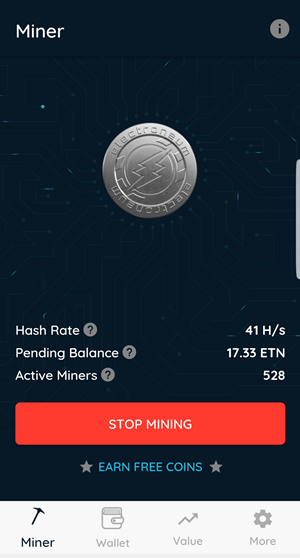 First off, how does one get ETN coins into the hands of millions of people?

Electroneum’s flagship product – the mobile mining application – is the team’s answer to this question. It will undoubtedly play the largest role in getting Electroneum adopted by the masses. If the mobile miner fails to get traction, Electroneum won’t be successful.

The app works by continually polling your phone’s available CPU power, and issuing ETN to your wallet based on that. In this way, it requires very little work on the user’s side. However, it is also a way of making sure that coins are not freely available, which would make them worthless. There can only be one app per phone, and the team is taking various precautions to prevent large-scale mobile mining by whales.

ALSO READ: How to Mine Electroneum with a Mobile Phone

The mobile miner will provide the incentive for users to download the application, knowing that by just leaving the miner running, they will receive a steady (although small) flow of coins into their online wallet.

Electroneum’s team might not be the best technical experts, but they are undoubtedly one of the best marketing teams in the crypto industry, given Richard Ells experience. This was illustrated when they were able to get more than 120,000 contributors in their ICO (a number unheard of in the ICO industry)!

A strong marketing strategy is crucial to the success of any product, and Electroneum certainly has the best team to market it to the masses. Moreover, a significant part of the $40 million raised during the ICO will be used for marketing.

We’ve all seen an Electroneum ad somewhere around the web and on billboards in the UK. In fact, I was introduced to Electroneum’s ICO through a Facebook ad in early October. You can be sure to see a lot more of these once the mobile miner is launched.

Electroneum’s CEO, Richard Ells, knows the value of strong business partnerships and has been honing them since day 1. He knows that Electroneum will be worthless if users don’t have anywhere to spend their ETN.

The Electroneum website states that they have signed agreements with global mobile airtime providers who will allow users to pay for airtime using ETN. If these partnerships materialize into something tangible, Electroneum will certainly see mass adoption. Some users will be able to pay for their mobile devices in full just by mining Electroneum!

Electroneum has also partnered with several brand companies such as Xius (65 million users), BMedia (20 million), Effortel (5 million), and FanFare (1 million) who partake in the launch of the mobile miner and market the app to their users.

Electroneum also became the first cryptocurrency to be granted membership into the GSMA (a body representing the interests of mobile networks and operators around the world). They will be holding their annual Mobile World Congress from 26 February to 1 May 2018 where Electroneum will be exhibiting their application and creating additional partnerships.

These partnerships will be the key to creating a complete user experience in which users can mine ETN and then spend it on something tangible.

However, word-of-mouth marketing is still the most effective form of marketing there is. Prospective users are much more compelled to take interest in a new product if they’re introduced to it by their friends.

And the Electroneum team is certainly aware of this. Not only did they implement a high-paying referral program during the ICO, but they also incorporated a referral program directly into the app. Richard mentioned that referees will be able to earn a portion of the coin mined by their referrals.

ALSO READ: How to Install Electroneum on an Android Device

This referral strategy will make sure that current Electroneum users will go the extra mile in telling their friends and family Electroneum.

5. Various Translations Available on the App

When the Electroneum online wallet launched on 13 December 2017, it was already available in 20 of the world’s most spoken languages.

Some third-world countries (who will likely benefit most from Electroneum) do not speak English as their first or even second language. This is, therefore, an important feature that will make the app accessible to non-English speaking users as well.

The whitepaper mentions that the team aims to have the app translated into 30 languages in due time.

The Electroneum app provides one of the most user-friendly interfaces for interacting with the blockchain. Their mining app allows users to send and receive ETN, check their wallet balances, and load coins from an offline wallet – all using a simple point-and-click interface.

This interface has been tried and tested by various large cryptocurrency exchanges like Coinbase and Luno and has proven extremely popular amongst its users. Having such an interface will put Electroneum ahead of many other altcoins.

Most users shy away from the command-line interfaces that cryptocurrencies usually operate in. So having a GUI interface will make the app much more accessible and usable to non-tech users.

As Bitcoin entered its growth spurt at the end of 2017, users new were shocked to see that the cost of one Bitcoin transaction could be as high as $20.

Electroneum has implemented a low transaction fee – on the order of 0.06 ETN, and often much less than that. Even if Electroneum were to reach a price of $1

However, the whitepaper has indicated that the team will start development of an Electroneum Virtual Currency Exchange, which will essentially allow Electroneum to act as an exchange between users that keeps track of everyone’s wallet balances. When this feature comes online, transactions will be near instantaneous.

This will allow Electroneum to provide users with the security of blockchain coupled with the speed of a centralized payment system.

In their whitepaper, Electroneum has discussed plans for entering the mobile gaming market. They plan on becoming a transactional coin that can be earned, spent, and transferred between various mobile games.

This would be an enormous opportunity for Electroneum. Imagine being able to make in-game purchases and unlock game stages with the Electroneum mined on your mobile phone!

If they are able to create a strong interface for game developers to integrate their games into, they will cement themselves in a community of millions of gamers around the world.

Lastly, the hype around Electroneum has been enormous. Electroneum has seen the single biggest ICO by user number thus far, attracting 120,000 contributors during the ICO. At the time of writing, the coin is 4 months old and already has 900,000 registered accounts!

Electroneum has also broken other records on social media, with more than 40,000 users in their Telegram group and nearly 120,000 followers on Facebook. Other user-created Facebook groups have seen member counts in excess of 70,000.

Once the mobile miner is launched, the community of this coin will certainly play a big role in marketing it to the masses.

Electroneum has a lot going for it. Despite the growing pains experienced in the days following the launch, it is still a pretty novel idea.

I for one am confident that this coin will see mass adoption soon. All the right ingredients are there. The strategies are in place. The hype is there. The technology has been tested at scale.

It’s just a matter of time…