Is Electroneum similar to Bitcoin, or different?

How does Bitcoin mining compare to Electroneum mining?

In this article, we’re doing an in-depth comparison between Electroneum and Bitcoin. 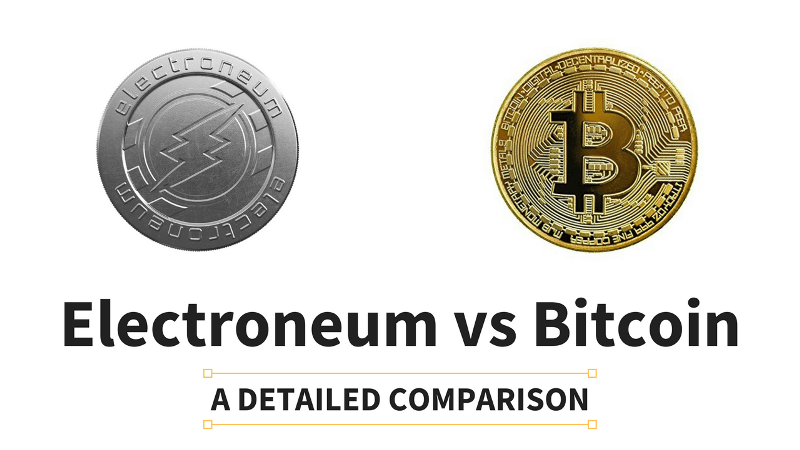 Both coins were created for widely different reasons, which is what makes them each unique and necessary in their own right.

ALSO READ: What is Electroneum?

Bitcoin has been a pioneer in the cryptocurrency industry and is therefore much older than Electroneum.

Regarding the creator and management team of each coin:

The fact that Bitcoin has no central management entity is both a blessing and a curse – a blessing in that it prevents any one person or entity from having control over the coin, and a curse in that it lacks the vision and focused direction that a CEO or leader provides. Electroneum has the best of both worlds in that it is managed by a centralized team (which spurs development goals and helps tremendously in forming alliances with other companies), but the actual Electroneum blockchain is decentralized and cannot be controlled by one person.

Electroneum and Bitcoin were created for entirely different reasons, and thus their target markets differ widely:

Market share is the number of users that make use of each coin and is, therefore, an indication of the coin’s acceptance around the world.

The fact that Electroneum was able to garner nearly a third of Bitcoin’s user base within 3 months after the Electroneum blockchain launch is an amazing feat, considering the fact that Bitcoin has been around for 9 years.

The Electroneum team has chosen the number of decimal places to make it easier for users to read prices.

Electroneum’s maximum coin supply was chosen as an arbitrary value that will allow mass adoption (keeping in mind that it only has 2 decimal places).

In terms of how much of each coin’s maximum supply is allocated to which use:

ALSO READ: How Many Electroneum Coins are There?

Electroneum was originally advertised as having “no fees” whatsoever, but during testing phases, it became apparent that a hacker could cripple the network by repeatedly transferring coins between various wallets. Therefore, a fee was added.

Monero is an open source project and thus copying its codebase was entirely legal. There were however, some bugs introduced through Monero’s codebase that were subsequently fixed.

ALSO READ: How to Create an Electroneum Paper Wallet

Being a mobile-centralized coin, Electroneum has been created from the ground up to be mineable with a smartphone. This is called the Mobile Mining Experience, which does not perform real mining, but rather a simulation of mining that will not heat up the phone or drain the battery.

ALSO READ: How to Mine Electroneum With a Mobile Phone

Both coins are important to the cryptocurrency community in their own right. Although this article showed various differences between the two, it is not true that one is better than the other. Bitcoin will be a “store of value” for years to come while Electroneum will take cryptocurrency mainstream and introduce it to the unbanked masses around the world.

Can you think of any other differences between the two?

Let me know in the comments, and I’ll update the article.